This study was performed in isolation of some pathogenic fungi from milk of apparently healthy cows. Eighty milk samples were collected from four quarters of twenty cows in the Abu Ghraib. Each sample was cultured on Sabouraud dextrose Agar at 28±2 ºC for 4-7 days. The most predominant mold and yeast were Acremonium spp. and Rhodotorula spp. that had used in the experimental infection. The number of experimental mice used in this study was 30 which divided into three equal groups. The 1st group was infected with Acremonium spp. by injection of 0.2 ml of 2*107 conidia/ml intraperitoneally. The 2nd group was inoculated with same dose and route with Rhodotorula spp., while the3rd group served as control group. All mice were sacrificed after 2 weeks of injection, Serum was obtained for biochemical analysis of hepatic and renal enzymes. Some of internal organs of infected groups were taken for histopathological study. The result recorded that the total percentage of fungal infection was 53 (66.3%) of these Acremonium spp. 9 (24.3%) and Rhodotorula spp. 7 (43.8%). Histopathological sections of the 1st group showed severe lesions in kidney than 2nd group although both groups showed lesions in most internal organs. Blood biochemical results showed the yeast has highest significant differences on ALT levels, while the mold has highest effect on serum creatinine, with insignificant difference on urea. In conclusion it could be said that in spite of Acremonium spp. and Rhodotorula spp. are considered as contaminant fungi, but they can cause disseminated mycosis in mice. 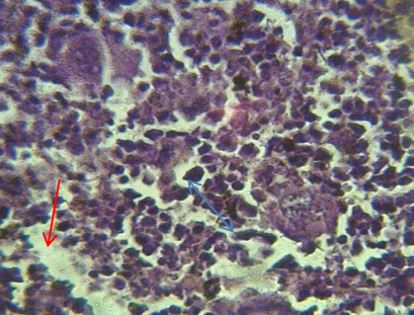