Ovine pulmonary adenocarcinoma (OPA) is a cancer disease in sheep caused by Jaagsiekte sheep retrovirus (JSRV). The retrovirus is distinctive among viruses for inducing carcinogenesis of lung epithelial cells and cause a lung adenocarcinoma. OPA has numerous characters same as human lung adenocarcinoma, involving a similar histological organization and motivation of most cell signalling pathways. P53 pathway is frequently changed in human lung adenocarcinoma, in specific due to the increase expression of MDM2 and it is the main regulator of P53. Here, we have a go at something new to confirm the possible expression of p53 and MDM2 in OPA as a translational animal model for human lung adenocarcinoma, and to identify the correlation between P53 and MDM2 expression. 1645 of lung samples from different breeds were macroscopically tested. OPA was recognized in 21 samples and further assessed by histology and immunohistochemistry. Histologically, proliferative cancer foci were distributed and contained of cuboidal or columnar cells and arising papillary to acinar patterns. The nuclear expression of P53 and MDM2 was detected in 90% and 95% respectively in the cancer epithelial cells of OPA respectively. Detectable immunoreactivity for P53 was detected in 6 out of 7 grade I, 7 out of 8 grade II, and 6 out of 6 grade III cancers. In reverse with P53, MDM2 was detected in 18 cases with moderate and high expression. In addition, there was statistically relationship between both protein expressions. Our findings suggested that overexpression of MDM2 plays an essential part in OPA carcinogenesis and is dependable on the grading system, and its overexpression can be convinced by P53 expression.

Chemoprevention is an important strategy to control the process of carcinogenesis and a number of plants with anti-cancer properties are being researched, some of which have shown promising results. Quercus infectoria galls is a well-known medicinal plant which has been used in medicine as larvicidal, anti-inflammatory, antibacterial, anti-fungal, antioxidant, and antidiabetic properties. The present study was carried out to evaluate the anti-tumor activity of the aqueous extract on the two stage process of skin carcinogenesis, consisting of initiation with a single topical application of a carcinogen 7, 12 - dimethylbenz (a) anthracene (DMBA) followed by a promoter (croton oil) three times in a week were employed. A significant reduction in tumor incidence, tumor burden, tumor yield, and cumulative number of papilloma was observed, along with a significant increase in average latent period in mice treated orally with 2 gm/kg of Quercus infectoria galls extract as compared to the positive control group treated with DMBA plus croton oil administered. Furthermore, Histopathological alterations in the carcinogen-treated control animals were also observed in the form of epidermal hyperplasia, keratinized pearl formation, and acanthosis in skin and tumors, whereas these were found to be reduced significantly before and after galls extract oral administration. The results thus concluded that Quercus infectoria galls extract exhibits significant anti-tumor activity and may serve in future drug development programs for the cancer prevention of skin cancer. 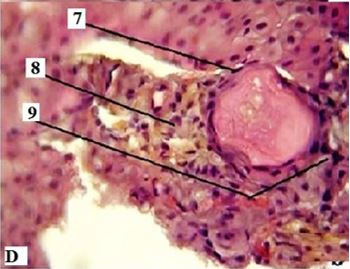 Mixed thymic tumor in a rooster: gross and histological features

A 2-year-old rooster local breed suffered from anorexia, emaciation with abnormal large mass in lateral side in cervical region was attended to Veterinary Teaching Hospital belong to College of Veterinary Medicine, Mosul University. After physical examination a movable and friable mass were recognized in cervical region. The case sends for surgical intervention. Gross examination of removed mass showed a friable, pale, will capsulated with hemorrhagic areas. Microscopically, the mass included three types of tumors. Squamous cell thymic carcinoma characterized by presence of keratin pearl. Lymphoma that characterized by atypical polymorphic lymphocytes, vesicular nucleus, and pyknotic nucleoli, while cytoplasm appears eosinophilic to granular with ill- define borders. Lipoma which appear as irregular shape of adipocytes that lack their nucleus, with scattered infiltration of pyknotic lymphocytes. This is the first pathological report of mixed tumor of thymus gland in rooster that composed from squamous cell thymic carcinoma, lymphoma and lipoma.

Incidence rate of breast cancer, clinical and ultrasound approaches to diagnosing the same in dogs

Mammary gland tumors in dogs rank second among all newly diagnosed tumors in this species. Research goalwas to study clinical/morphological characteristics of breast cancer in dogs with the use of ultrasound investigation. 34 dogs of different breeds and age groups with spontaneously emerging neoplasms of mammary glands were chosen for the study. To classify malignant tumors, the histological classification was applied. Complete examination of breast tumors was carried out with the help of clinical observation, ultrasound, radiologic, hematological and ultrasonographic methods applied. The largest percentage (23.5%) of animals with mammary gland neoplasms are mongrel female dogs. The breed predisposition was detected in dogs of the following breeds: Miniature Schnauzer - 11.9%, Standard Dachshund - 11.9%, American Bulldog, American Cocker Spaniel and Miniature Poodle - 8% each. Breast cancer was diagnosed in 29 animals (85.3%), 100% of those cases in the nodular form with microcalcifications in the tumor parenchyma. The horizontal orientation of growth is more often typical of breast cancer in the mammary gland pairs I and II at the initial stage of carcinogenesis, and is characterized by an inhomogeneous hypoechoic structure with sufficiently pronounced boundaries detected during the ultrasound investigation. The vertical orientation of growth is mainly typical of breast cancer in the mammary gland pairs III, IV and V from the very beginning of the disease. The ultrasonography usually shows: inhomogeneous hypoechoic structure containing inclusions in the form of cords or foci of a higher acoustic solidity; also clearly defined lateral acoustic shadows and dorsal echo enhancement; as well as unevenness and indistinctness of borders. The performed histological study within the current research revealed a multifocal, infiltrating epithelial neoplasm with distinct edges, surrounded by a large amount of fibrous tissue. The tumor consisted of a number of acini with a tendency of forming a network structure. The shape of cells was detected from round to irregular, the cytoplasm was found scarce, often with uneven borders, with the large central core, with chromophilic substance and 1-2 nucleoli. The cells were characterized by the pronounced anisocytosis and anisocariosis, and a great number of mitotic figures. Lymphatic invasion was observed. Ultrasound investigation of the mammary gland allows for performing percutaneous minimally invasive interventions and differential diagnostics of cystic and solid lesions of the mammary gland (96-100% accuracy), mastopathy and carcinoma conditions.

Twelve Hawshar bitches were (3-5 years in aged) examined clinically and vulvovaginal tumor masses were diagnosed histopathologically revealed the three types of tumor which include; (three cases of vulvovaginal diffuse small cell lymphoma, six cases of vaginal transmissible venereal tumor, and three cases of leiomyoma), these masses were removed surgically with local excision with or without episiotomy and recurrence of the tumor showed in some cases after following up for different duration. In conclusion, this study revealed that the age with physical condition of the dog were played an important role in cancer occurrence, and the surgical excision was not regarded as the ideal treatment especially in malignant tumor.