This study aimed to detect Brucella antibodies in the sera of dairy cows and to identify Brucella species in the milk of seropositive cows. A total of 100 sera and 100 milk samples were collected from two 50-cows groups (group 1 with and group 2 without a history of reproductive problems and/or decreased milk production). Rose Bengal plate test and indirect ELISA were used to explore Brucella antibodies in the serum samples and thereafter milk samples of seropositive cows were undergone PCR analysis using Brucella genus specific primers and 3 pairs of species specific primers for identification of B. abortus, B. melitensis and B. suis. The RBPT showed 22 cows were carriers for the Brucella antibodies, 18 in group 1 and 4 in group 2 whereas the iELISA showed only 10 cows out of these 22 cows were positive, 9 in group 1 and only 1 cow in group 2. The PCR assay, which was performed on milk samples of the RBPT positive cows, revealed 18 samples were positive for the Brucella genus and the Brucella abortus species and were negative for Brucella melitensis and Brucella suis species. As a conclusion, the results of this study showed that brucellosis has been encountered in cows with or without a history of reproductive problems, and the RBPT followed by PCR assay for milk samples of the seropositive cows could provide more specific detection than performing either test alone and could be more useful for rapid screening of brucellosis in dairy cows.

A few reports are available for detection of L. monocytogenes in fish in Iraq, however, the current study was undertaken to investigate the potential role of Listeria spp. in common carp fish in Baghdad province, Iraq. A total of fresh thirty raw common carp (Cyprinus carpio) were purchased from fish sellers of various local markets in Baghdad city from (December 2017 to March 2018) The viscera was removed aseptically, the bacterial isolation and identification was conducted by a conventional culture method using Listeria selective media, biochemical tests and Vitek 2 for gram-positive. Pathogenicity of isolates was studied in vivo by inoculating mice with bacterium. Targeting virulence associated genes was used to detect the virulence and to confirm the L. monocytogenes isolates. The isolates were tested for antimicrobial susceptibility by disk diffusion method for 12 antibiotics. The results revealed that 6.66% of L. monocytogenes were identified from common carp fish viscera and the isolates were pathogenic in mice. L. monocytogenes virulence associated genes were detected in both isolates, while L. innocua virulence associated gene (Lin0372) was detected in one of the two isolates. The isolates were resistant to 7 out of 12 antibacterial drugs including tetracycline, ampicillin, methicillin, cefixime, oxacillin, cefotaxime and penicillin G. The results suggest that presence of L. monocytogenes in fish may have a serious role in public health hygienic in humans. 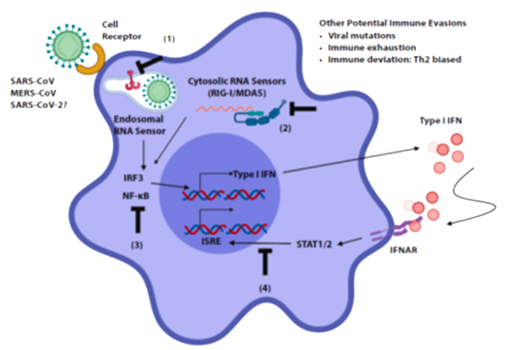 Coronaviruses (CoVs) are important RNA viruses that affect respiratory, gastrointestinal and urinary system of human being and birds. These viruses originated from the subfamily Coronavirinae which genetically includes Alphacoronavirus, Beta coronavirus, Gamma coronavirus and Delta coronavirus. The sequencing analysis of the genome showed that COVID-19 caused by SARS-CoV-2 belongs to Beta coronavirus genus and avian infectious bronchitis caused by IBV comes from Gamma coronavirus genus. Over the past few decades and until now, the world showed that endemic outbreaks of infectious bronchitis in avian caused by IBV. Once more, the world sees the emergence of another new human coronavirus COVID-19 outbreak due to a new strain called SARS-CoV-2. Whole genetic material and comparative genomic analysis exhibited that IBV and SARS-CoV-2 have particularly same genomic structures and characteristics. Both have a spike protein in the genome structure which allows that SARS-CoV-2 attaches to their human select cells throughout ACE2 receptors, that are notably reported in the lung and kidney. While IBV uses alpha (2,3) linked sialic acids-dependent manner for bind to the avian tissues which is notably reported in the lung and kidney. The two diseases are produced a pulmonary and urinary infection that lead to sneezing, gasping, respiratory massive destruction, severe pneumonia and renal failure. This review will introduce a general overview of two diseases and describe the phylogeny, epidemiology, pathogenesis, clinical features, autopsy report and microscopic lesions.

The present study included the serological screening of toxoplasmosis caused by Toxoplasma gondii as one of the abortion causes in (463) pregnant women aged between (18-40) years. They were consulted Al-Zuharaoy, AL-Salam and AL-Bitol hospitals in Nineveh Governorate. Tests for screening toxoplasmosis were latex agglutination test LAT and Modified MLAT by using 2-mercaptoethanol(2-ME) compound and ELISA to distinguish between acute or chronic infection. The level of Anti Cardiolipin antibodies type IgM (ACL-IgM), Anti-Streptolysin-O (ASO), Rheumatoid factor (RF), Anti-Nuclear Factor (ANF) were also estimated in the serum and the relation between these factors and the infection was also checked. Other important factors such as age, profession and contact with animals suspected in causing infection were also investigated. The results showed that frequency of infected cases was (79%) using LAT and(46%) using MLAT was (46%) while ELISA detected (37%). Eighty nine of pregnant women who have positive (ACL–IgM) also gave positive result for LAT. Seventy one percentage of them were active cases by using MLAT and (63%)by using ELISA. The result also revealed that (78%) of infected women were positive to ASO tests and only (9%) to RF test but no interaction between infection and ANF test were noticed.