The current study was conducted during the period from September 2019 to December 2019, the number of examined samples 150 abomasums isolated from males 127 and females 23 to identify the species of Parabronema skrjabini that infected one-humped camel slaughtered in Al-Ashraf Najaf slaughterhouse. The microscopic examination of the worms was properties compared to other worms of the digestive system, and then confirmed using genetic markers with the polymerase chain reaction (PCR). Finally, the use of sequencing and phylogenetic analysis technologies relative to those that are predominant in world regions registered in the Gene bank. The results of the microscopic examination showed that Parabronema skrjabini distinguished by a red color, females are curved dorsally and longer than males with a vertically curved and head features that resemble a horseshoe for both sexes. The number of infected samples is 53 (35.33%) and the non-infected samples 97 (64.64%). The highest rate of infection during December month 63.41%. On the other hand, the prevalence rate has been reported 65.21% females and 29.92% males with significant differences. In this research, PCR technique was used the molecular examination with the selection of the highest DNA samples, which were 10 samples to determine the alignment range according to the ITS2 gene, all samples were well suited to primer in length 783 bp and confirmed the diagnosis of these nematodes. 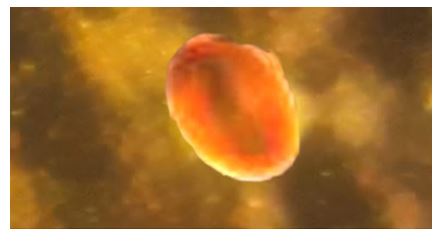 This study was conducted for comparison between two different modern methods for the diagnosis of the nematode worms' infection in sheep we used acridine orange fluorochrome and specific staining kit in fecal samples. We examined 50 sheep fecal samples; the total infection rate was about 96% when was used lectin - fluorescein kit while the total infection rate was 74% when we used acridine orange fluorochrome technique. In conclusion of this study indicated that lectin - fluorescein kit is more effective than acridine orange fluorochrome in the diagnosis of nematode worms' eggs. Also, we conclude from this study the importance of using fluorescence - lectin kit technique in the diagnosis of nematodes eggs because they are distinguished by their speed, efficiency and accuracy, as they compare with the fecal culture technique to cultivate the larvae from eggs in order to diagnosed the type of nematodes eggs, the lectin - fluorescein kit technique is the first in Iraq.