In the current study, probiotic Batcinel-K® and CEVAC SET-K® vaccine are used to determine their effects on some hematological and biochemical parameters of broiler-chickens. Three hundred broilers chicks "Ross-308" at one-day old were divided into six groups of 50 chicks /each. Blood was taken at 56th, 63rd and 112nd days old. The count of erythrocytes and leukocytes was calculated. Hemoglobin and total serum protein, serum albumin and globulins concentration was determined. Results show that these selected probiotic can improve some of the blood indexes of birds, especially in combination with the vaccine. At the 63rd day old of broilers chicken, globulin parameters in 4th and 5th treatment groups were higher by 2.97% (P 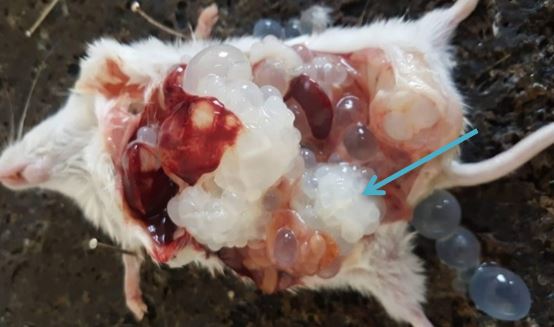 This study was conducted to determine the effect of the heat stress on some blood parameters and role of probiotics (Poultrystar®) to reduce these effects, 120 common carp (Cyprinus carpio) with mean weight 150±10g were obtained from collage of Agriculture and forestry /University of Mosul. Fish were acclimated for at least 7 day in the laboratory and fed daily, the water temperature was maintained at 25 ±2°C. Three experiments have been done, each of 40 fish which have been divided randomly into four groups 10 for each. First experiment the four groups exposed to different water temperature (control 25, 30, 32, 34 °C), second experiment the four groups treated with (Poultrystar®) in a dose 1 g/ kg body weight by using stomach tube with exposed to heat stress (control 25, 30, 32 and 34 °C). In the third experiment the four groups have been treated with (Poultrystar®) in the same dose of the previous experiment for 7 days then exposed to heat stress. The results show there were significantly increase in hemoglobin concentration in three experiments, and also the Packed cell volume was significantly increase in three experiments, but the stress index was significantly decrease in three experiments, and the probiotics (Poultrystar®) improved the blood picture especially in the second and third experiment because no probiotic used in the first experiment.