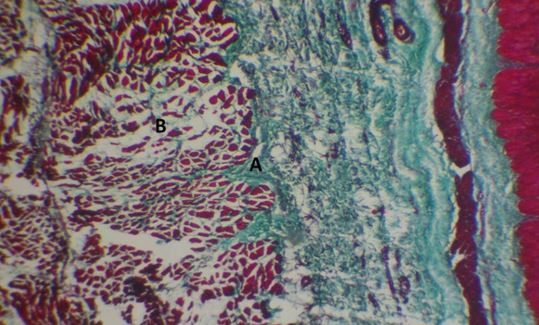 One hundred fifteen samples of the urinary bladder were collected randomly from slaughtered local bovine calves in Mosul city during March 2018. Gross and histopathological changes revealed in 37 samples 23.1%. Gross changes represented by congestions, petechial hemorrhage, inflammation and cystic hernia. Histopathological changes included the disturbances of cell metabolism represented by cell swelling of transitional epithelial cells and smooth muscle cell 16.2%, and coagulative necrosis of epithelium of mucosa and Zenker's necrosis of muscular layer 40.5%. cell adaptation manifested by epithelial hyperplasia 18.9% and smooth muscle fibers atrophy 8.1%. Circulatory disturbances represented by hyperemia and congestion 51.3%, petechial hemorrhage, edema and thrombi 5.4% for each. Acute cystitis showed in percentage of 18.9% while chronic cystitis was 13% and fibrosis 21.6%. Congenital deformities represented by cystic hernia 13% and bladder wall intrusion 5.4%. This study concludes the presence of different types of pathological changes in the urinary bladder of slaughtered local bovine calves in Mosul city which indicates presenting different types of causative agents and infections.