(FPL) is a common contagious disease with high morbidity and mortality rates. This study was performed in the Baghdad capital city of Iraq from January 2018 -to- February 2019. Fecal and blood samples were collected from both diarrheic and non-diarrheic 180 cats, of both sexes. Hundred pet and eighty stray cats were divided into 2 groups according to their ages: > 1-year and < 1-year. Fecal samples were checked for presence of FPL virus antigens by rapid antigen test kit (immunochromatography assay) and blood samples were tested for presence of FPL virus specific antibodies by ELISA test as well as the study of blood parameters of cats. Forty cats 22.2% were infected with FPL virus by ICG assay, while a high percentage of total seropositive rate 65 (36.1%) was founded by ELISA test. Significant higher infection 27.5% and seropositive 36.7% rates were observed in cats less than one-year age. Clinically the infected cats showed multi-systemic signs and the vomiting was the more frequent sign 87.5%, hematological changes showed significant decrease in hemogram values and prolonged clotting time, the total leukocytic count was lowered in infected cats and this owing to significant decrease in absolute numbers of lymphocytes and neutrophils. In conclusion FPL virus was widely spread in Baghdad and higher infection rate was recorded in a stray cat.

The study period carried out from 25 April 2018 till 21 May 2019 through the rearing and production period including totally of 24000 birds (20800 females, 3200 males). The number of tested blood samples was 452 divided to 255 samples at the rearing period, 143 samples at the production period and 54 samples of offspring. The results of antibodies titer in the sera of non-vaccinated broiler breeders obtained by ELISA showed the maternal derived antibodies titer for 28 samples at 0-5 week/day of age was 5716±612.7, this titer decreased gradually at 3-1 week/day age till to 1075±234) Then the titer was elevated increasingly after vaccination with both live attenuated and inactivated vaccines and reach to peak 37512±2049.4 at 20-1 week/day age. Whereas the bimodal graduation of antibodies titer showed at production period till to end of study. The mean of maternally antibodies titer in the tested sera of the offspring chicks 0-1 week/day that hatched from parent flocks at 32, 39 and 48 weeks of age was 9012±872.4, 6591±368.1 and 4831±982.7 respectively. Thus, we concluded the repetitive vaccination of broiler breeders flock with live vaccine as well as inactivated vaccine is very necessary in endemic areas and ELISA is a good serological test for following, checking and monitoring of immune status of poultry flocks periodically. 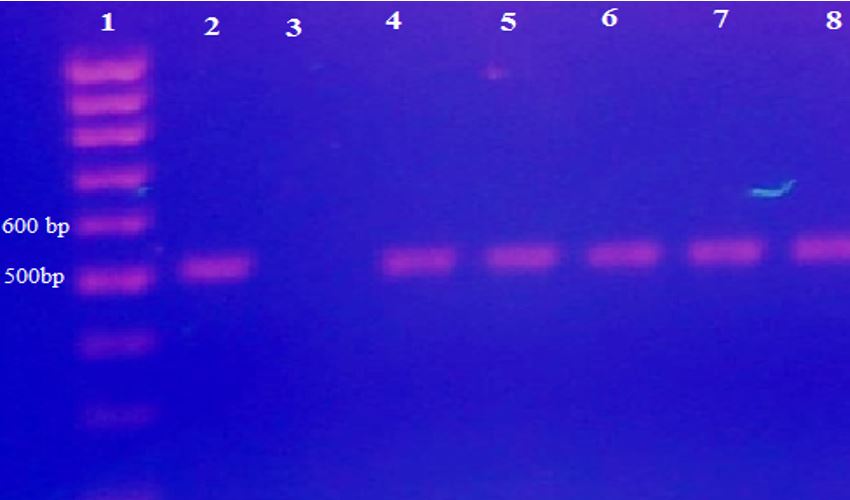 This study was to investigate the specific antibodies of Leishmania using Enzyme-Linked Immunosorbent Assay to detect the specific antibodies of the Leishmania donovani complex (L.infatum, L.chagasi, L. donovani) in 80 dogs of both types (domestic and stray dogs) of different ages and both sexes in the Nineveh Province for the period from May 2018 to October 2018. Some animals suffered from the appearance of skin ulcers in the face and quarters and diarrhea, vomiting, Paw pad fissures, the other animals did not show any clinical finding. The results showed that the total infection rate was 55%, the highest percentage of dogs with skin lesions 80.9% with significant differences with other groups, the stray dog's groups recorded high infective rate when compared with domestic dog group 62.96 and 38.4% respectively with significant differences.

Toxocara (T.) canis is a nematode parasite of canines; belong to the Ascarididae family, which accidentally infected humans. Puppies expel the eggs with the feces from the fourth week of the life cycle. This study is the first study in Iraq for detection seroprevalence in stray dogs and extended from January to September 2017. Our study was aimed to investigate the seroprevalence of T. canis infection in stray dogs from different areas in the Al-Diwaniya province, Iraqto detection of specific IgG antibodies to T. canis compared to Conventional PCR technique with the effect of the risk factor. One hundred of the blood sample and one hundred of a faecal sample of same dogs after shooting were studied usingindirect ELISA test and PCR. The result revealed that 71% of the dogs had a seropositive result for this parasite by ELISA test. Dog age is an important factor and affects seroprevalence, were shown that positive rate in adult dogs was more 83.05% than the young dogs 53.65%, while no significant between dogs according to sex. PCR technique showed 58% of dogs were positive forinternal transcribed spacer 1 (ITS1) ribosomal RNA. The sensitivity and specificity of ELISA test was 79 and 40% respectively.