Exposure to LTE 2600 MHz microwaves is increasing very fast as new technologies and become accessible worldwide, and the smartphones being the main source of these waves. The aim of this study is to assess the thermal effect of 4G signals on rats. Forty adult Albino rats were used throughout the study, assigned as control and exposed groups, equally. Rats were kept in Plexiglas cages with intermittent exposure to LTE mobile-phone like signals at an average of 2h/day for up to 30 continuous days with SAR value of 0.982 W/kg. Infrared images were snapped immediately after the end of the exposure time, then one hour, two hours, and four hours later at a rate one collection/week during the study. IR images were analyzed by FLIR Tools software. The results exhibited variation in reflected skin temperatures in the exposed group compared to control images. Furthermore, the analysis of collected data revealed significant variations over the course of the study compared to the first week. The rise in skin temperature observed in response to exposure in the first week, which decreased gradually increased exposure and this drop in reflected skin temperature was significantly related to amount of exposure. The study concludes that the LTE 2600 MHz exposure under controlled laboratory conditions has a thermal effect on the rats.

The safety region of imatinib, and markedly its role in testicular toxicity has been studied in a controversial manner in current years. This study was designed to address the repercussion of administration of groups of pups with imatinib mesylate (at neonatal or infantile periods) using histological analysis of their testes in several end points and in adulthood. Intact pups (albino-male) exposed to 200 mg/kg of oral imatinib once daily at neonatal and early infantile period on PND 1 to PND10 (for ten days). All experiments performed with age and weight matched control which administered with Distilled water. Pups were into categorized into 4 subgroups, according to the ages of euthanasia: 15 days postpartum (PND); 40days postpartum; 70 days postpartum and 140 days postpartum. The histological analysis was conducted in blind fashion after staining with (Harris Hematoxylin and Eosin stain. Ten randomly selected testicular sections from each rat were analyzed qualitatively and quantitavely. In addition, Johnsen' scores were used to analyze the effect of drug on spermatogenesis. Data were recorded and value is considered as significant when it P 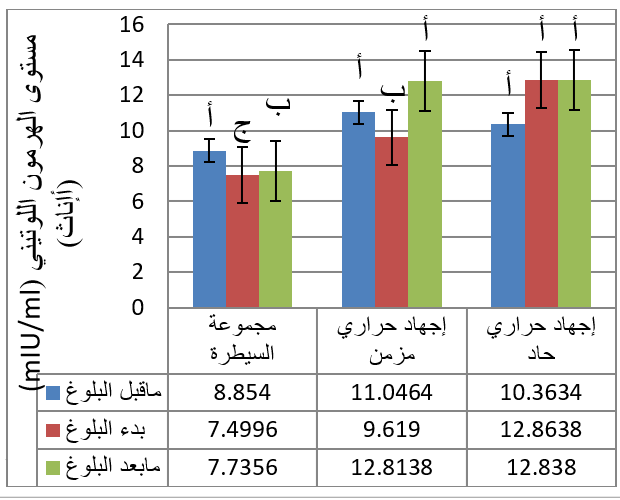 Prosopis farctais belonged to Mimosaceae family, commonly known as mesquite. It was chosen to investigate their effect on α-glucosidase inhibitory activity (in-vitro), serum glucose and liver functions. Roots, fruits, and leaves of P. farcta, were extracted by n-hexane, ethyl acetate, and methanol. α-glucosidase inhibition was analyzed by using ELISA technique then half maximal inhibitory concentration IC50 was found. The blood glucose levels were determined with a glucose analyzer model. The serum alkaline phosphatase (ALP), Alanine transaminase (ALT), aspartate aminotransferase (AST) and serum total bilirubin (TB) were estimated by using the Cobas diagnostic kit with a fully automated chemical analyzer. Diabetes was done by a single dose of 120 mg alloxan/kg b.w with subcutaneously injection. Ethyl acetate extracts of P. farcta showed the higher α-glucosidase inhibitory activity, and the best one was root extract. Treatments of the alloxan-induced diabetes rats were done by daily oral administration of different concentrations with P. farcta extracts of ethyl acetate for 28 days and the dose 200 mg/kg BW was the effective one. The root extract was the best one for reduction of serum glucose followed by leaves then fruits. Administration of root extract of P. farcta showed a decrease in the levels of ALP and TB in alloxan-induced diabetes rats. The fruit extract of P. farcta showed decreasing in the level of ALP in alloxan-induced diabetes rats. In conclusion, the P. farcta extracts for ethyl acetate have properties of hypoglycemic effect as well as improving some parameters related with diabetic complications of liver functions.

This study was conducted to investigate the possible protective role of (CoQ10) on reproductive dysfunction of male rats induced by sodium fluoride (NaF). thirty two rats were divided into four even groups and treated for 56 days as follows: the first group served as control (C) The second group (G1) received coenzyme Q10 at dose of 10 mg/Kg.B.W; while third group (G2) received 100ppmsodium fluoride in drinking water and fourth groups (G3) received NaF 100 ppm and CoQ10 10 mg/Kg.B.W for 56 days. The results showed that exposure of rats to NaF caused decrease in serum testosterone (T) and luteinizing hormones (LH) concentrations. Whereas Administration of CoQ10 caused an increase the concentrations of theses hormones in group G3 as compared with group G2. Testicular morphometric and histopathological alterations were observed in group G2 in the form of marked microvacuolation in the basal level of germinal cells, amyloid deposited within seminiferous tubules with disarrangement and depletion of germ cells. Whereas testicular histological alterations were improved in rats treated with CoQ10. In conclusion, the results of the present study showed that use of Co Q10 can alleviating the deleterious effects on male reproductive function following exposure to NaF, may be via improvement the testicular functions or other related endocrine glands.

This study was designed to evaluate the cytotoxic effects of cadmium chloride (CdCl2) on thyroid and adrenal gland of male rats (Rattus norvegicus). Thirty six male rats were used and randomly into three groups each of 12 rats, the first group(G1) kept as at control. The 2nd and 3rd groups (G2 and G3) were administrated orally cdcl2 at doses of 15 and 20 mg/kg.B.W. respectively for 6 weeks. After the treatment period, the rats were sacrificed, then thyroid and adrenal glands were removed and processed for light microscope. Light microscopic examination of thyroid gland with (15mg/kg.B.W.) showed increase in the size of follicles, some of these follicles appeared empty from any colloidal substance and heavily infiltrated by inflammatory cells, with depletion of parafollicular cells. Vaculated follicles may be clear in other sections, and showed congested blood vessels, vascularized stroma, hyperplasia of thyrocyte in rats treated with 20 mg/kg.B.w. Results also noted changes in different regions of adrenal gland related to rats exposure tocdcl2 with 15 mg/kg.B.W., these includes cellular debris, necrosis of cortical cells, amorphous material in the zona fasciculate and focal necrosis in zona granulosa with disruption of normal structure and replaced by necrotic cells and inflammatory cells, also obvious adipocytes infiltration which appeared clear in medulla. Most changes occurred within the adrenal cortex and appeared more severity than that in the medulla region. Hypereosinophilia, pyknotic nuclei, congested blood vessels, hemorrhage, degeneration and inflammation also seen in both regions (cortex and medulla) of adrenal gland from rat exposed to cdcl2 at 20 mg/kg.B.W.