The current study was done to investigate the effects of two doses 3and 6 mg/kg B.w. of the Platinum drug on the structure of the liver and kidney of pregnant mice, and embryos in addition to the weight of the mothers', embryos ,'maternal liver and kidneys, as well as some biochemical parameters, were established. For this study, thirty pregnant mice were used, divided into three groups (10 mice/group) as follows; group I (control group); animals were injected intraperitoneally (IP) with distilled water on the days 7th, 12th, and 17th of gestation. The other both groups II, and III were injected intraperitoneally (IP) with the selected doses above of the Platinum at the days 7th, 12th, and 17th of gestation, respectively. Microscopically, maternal and fetal' liver sections of group II revealed vacuolation, swelling, apoptosis, infiltration of inflammatory cells, congestion, degeneration, and presence of the extramedullary hematopoietic cells, respectively. Previous lesions were increased in group III. Maternal and, fetal kidney sections of group II revealed degeneration, expansion of Bowman's space, inflammatory cells infiltration into interstitial tissue, and blood capillaries congestion. However, the previous lesions showed more severity in group III. The drug caused a reduction in the body weight of the mothers, selected organs, and embryos. Biochemical assessment of the maternal serum AST, ALT, and ALP levels showed an increase in both experimental groups II and III, but to varying degrees. Moreover, both groups II and III showed an increase in the levels of the maternal BUN and, urea. Whist, group III showed a significant increase of the creatinine compared to the control group. In conclusion, using anticancer drugs during pregnancy will harm both mothers and fetal organs. The risk of these medications represents their ability to cross the placenta and enters the fetal body. Therefore, the drug may affect the formation of the fetal organs. The drug also alters the regulatory antioxidant mechanism in the maternal body during the treatment duration. The drug should be used under medical follow up.

Effect of levofloxacin on some body tissues in mice

Levofloxacin is a third generation of fluoroquinolones family. It is commonly used in the treatment of a several bacterial infections. However, misusing antibiotics impose damage to hepatocytes and myocytes. The present study was conducted to access the effect of levofloxacin on tissue histology in mice taking in consideration dose and duration of exposure. 24 matured male Albino mice were divided into 3 groups, Group G1: was considered as a control group. They received normal saline intraperitoneally / day. Group G2: They received 10.7 mg/kg/day of levofloxacin intraperitoneally for 10 days. Group G3: They received 10.7 mg/kg/day of levofloxacin intraperitoneally for 3 weeks. Microscopic examination of liver sections of group G2 revealed severe congestion of blood vessels in the portal area and central veins with inflammatory cells infiltration. While in group G3, Apoptosis, Degeneration and necrosis of hepatocytes with giant cell transformation were noticed. In addition to kupffer’s cell activation. Heart sections showed moderate congestion of blood vessels with edema in between the myocytes and inflammatory cells infiltration. Group G3 Necrosis with pyknosis of cardiac muscle nuclei was noticed. We concluded that levofloxacin induces toxic effects on liver and heart according to the dose of administration and duration of treatment.

Application of ultrasound contra infection with secondary hydatidosis in mice

Baraa B. Ramdan; Asmaa A. Ali

The present research explained the impact of ultrasound on the viability of Echinococcus granulosus protoscolices in vitro application of fixed frequency waves at 20000 pulse/sec and 1.8 w/cm2, with different exposing periods, thirty, twenty, fifteen, twelve, ten and five seconds respectively, subsequently prevention of mice against interjected with minor hydatid cysts, in comparison with the control animals infected with protoscolices without exposure to ultrasound waves, depending on many criteria including the numbers, weights and diameters of developed hydatid cysts. The results displayed an obvious impact of ultrasound waves on Echinococcus granulosus protoscolices viability number by increase of exposure period in vitro, in addition to a decrease of 100% of hydatid cysts numbers in the dealt ones with 17% fertility exposed for 20 seconds, the reduction rate was 99.23% in the group of fertility 35% which exposed for 15 seconds, after four and five months of infection. 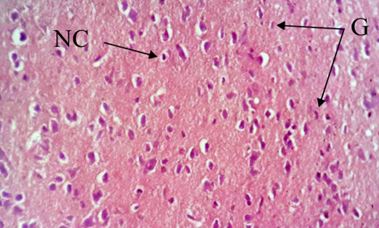 In this Study, Toxoplasma gondii was diagnosed and isolated successfully from domestic (Stray) cats at Mosul city, Iraq using Latex test and the flotation method of fecal material. The study also included experimental induction of the condition by giving orally oocysts of T. gondii to albino mice at a dose of 1000 sporulated oocysts and leaving the mice for 14 days. All infected mice (15 with tissue cysts) were fed to 8 cats negative for latex and fecal flotation method. The pathogenesis of the isolated T. gondii has been followed through daily fecal examination which indicated the presence of oocysts at the 5 th post infection
(p. i.) day. Postmortem examination of 2 cats was done at 3, 7, 14, and 21
days p. i. with preparation of histological section from the intestines, liver, spleen, pancreas and brain. Additionally, histological techniques were done for the intestines and liver. Clinical sings were not seen in cats infected experimentally. Grossly, multifocal areas of necrosis and severe congestion were seen most prominently in the brain. Histiochemically, there was an increase in mucopolysaccharide in the intestine and in glycogen infiltration in hepatic cells.