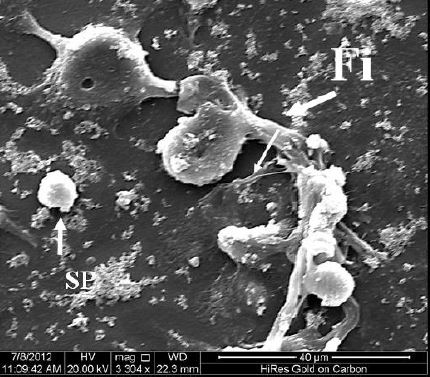 The pancreas of male adult native rabbit was studied by using light microscope (LM) and transmission electron microscope (TEM). The pancreas possessed both exocrine and endocrine portions. Exocrine portion included both acinar and ductal cells. The acinar cells were pyramidal in shaped which formed the lining epithelia of secretory units (acini). The apical cytoplasm of acinar cells contained unequal size and variable electron opacity of zymogen granules, while the basal part occupied by well-developed rough endoplasm reticulum (rER). Short microvilli projected from the free surfaces of both acinar and ductal cells. The lateral cell membranes of adjacent acinar and ductal cells adhere apically by junctional complex, which was composed of zonulae occludens and zonulae adherens. There was notable interdigitating between the lateral cell membranes of neighboring ductal cells that were located beneath the junctional complex. The oval or irregular pancreatic islets consisted of β, α and δ endocrine cells. Both β- and α-cells could be demonstrated by using LM and TEM, whereas δ-cells visualized with TEM only. The cytoplasm of β-cells contained purple granules and α-cells showed yellowish granules in their cytoplasm when stained with aldehyde fuchsine method. At ultrastructure level, the cytoplasmic granules of β-cells were identified by homogenous electron dense core with clear hallo zone, the numerous granules of α-cells had very electron dense granules and δ-cells contained few granules similar to those of α-cells.β- or α-cells inserted as a single cell and in a partial manner between the ductal cells of some ducts.

Fifteen Kestrel were used in this study regardless to their sex. The results study showed that the pancreas of adult Kestrel (Falco tinnunculus) lies under the right side of the peritoneal cavity, and situated between the descending part and ascending part of the duodenum and has pale pinkish to white pinkish colored and consisted of 3 lobes dorsal (lobus pancreatic dorsalis), middle (middle pancreatic lobus) and ventral (lobus pancreatis ventralis) with well-developed interlobar connections made it difficult to distinguish between the 3 lobes. Histologically the pancreas of adult Kestrel (Falco tinnunculus) was covered by very thin layer of connective tissue with mesothelial cells, Connective tissue septa extended from capsule into parenchyma of pancreas dividing it in to many lobules. These septa were very thin and some of them carried blood vessels distributed all over the pancreas. The exocrine portion was constituted from serous acini with pyramidal shaped cells which had dark rounded nucleus in the middle part of the cell. Acidophilic granules found in the apices of cells. Centro acinar cells found as one or two nuclei in the center of the pancreatic acini. The endocrine portion (islets of Langerhans) was formed from clusters of endocrine cells in shape of oval or rounded pale structures with different sizes. The small one has mean diameter of 40.02±0.9 µm while the large one has diameter of 126.3±3.8 µm. Few endocrine cells were seen distributed as single cells among the pancreatic acini.

The present study was designed to find the macroscopic, microscopic and histocamical properties in pancreas of white-eared bulbul (Pycnonotus leucotis) and ductal system, ten healthy adult birds were transferred to the veterinary anatomy laboratory in Al-Qasim green university. Macroscopic study revealed that the pancreas was white in color, formed from two lobes, the ventral lobe navicular in shape while the dorsal lobe was very thin like triangular in appearance but longer than the ventral lobe. The two lobes were not occupy the space between the descending and ascending limbs of duodenum, the mean weight of birds and whole pancreas was (27.6±3.04), (0.07±0.022) gm respectively, the mean weight of dorsal and ventral lobes was (0.034±0.005), (0.036±0.0054) gm respectively and the mean length of dorsal and ventral lobe was (1.3±0.05), (0.88±0.03) cm respectively. The pancreas was a small organs in white-eared bulbul. The result of microscopic study that the pancreas in white-eared bulbul similar to other birds and covered by a thin C.T capsule with mesothelium cells. The pancreas parenchyma was consisted of exocrine and endocrine portions, the Langerhans island appeared in dorsal lobe in all histological sections which composed of different shapes and sizes. The intercalated ducts of ductal system lined by simple to low cuboidal cells then the epithelia changed to simple cuboidal in interlobular duct and become columnar in larger ducts. The main excretory ducts composed of three histological layers mucosa, muscularis and adventitia.