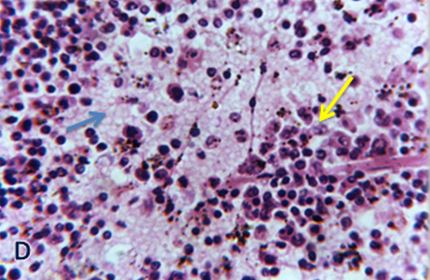 This study aimed to assess the changes of blood cells constitutions and study the histopathological sections of liver and spleen in dual sexes mice infected with brucella melitensis and the role of chitosan supplement with and without Rev-1 vaccine in enhancing the inflammatory proses, two experiments were undertaken on 100 albino mice, aged 8-10 weeks for 60 days, first experiment done on 50 males and second one done on 50 females. Results of hematological analysis showed that there are significant increase at P3), red blood cells count RBC (× 106), hematocrit (HCT), mean corpuscular value (MCV), mean corpuscular hemoglobin (MCH), mean corpuscular hemoglobin concentration (MCHC), lymphocyte (LY%), granulocyte (GR) and lymphocytes m/mm3 (LYM) in males treated groups comparing with females, the highest values were in immunized infected mice with chitosan diet supplement compared to infected animals. The histopathological lesions recorded there is presence of chronic inflammatory reaction characterized by mononuclear cell infiltration with presence of granulomatous lesion in the liver of immunized animals, presence of mild to moderate lesions characterized by hyperplasia of lymphoid tissue in spleen and small granulomatous lesions in liver of immunized animals fed diet with chitosan supplement.

The significance of milk ring test for identifying brucella antibodies in cows and buffaloes' raw milk at Erbil governorate, Iraq

This study was undertaken to monitor Brucella antibodies in the milk of cows and buffaloes in Erbil Governorate, Kurdistan Region, Iraq, using mik ring test (MRT) assay. A total of 210 samples of milk (130 from cows and 80 from buffaloes) were randomly collected from lactating females. The overall prevalence of Brucella antibodies in all the milk samples was 8.6% (18/210). The highest rate was 9.2% found in the cow milk (12/130), while the lowest rate was 7.5% of the buffalo’s milk (6/80). Out of 210 milk samples, only 15 (7.1%) were culture-positive for Brucella; about 7.7% (10/130) and 6.3% (5/80) from cows and buffaloes respectively. In terms of comparison between MRT and standard milk culture method, MRT was found more sensitive (83%), specific (98%), with the accuracy of 97% in comparison to the employed culture approach to detect Brucellosis agents in milk. The results also revealed that 70% and 60% of isolates were Brucella abortus, while 30% and 40% were Brucella melitensis from the milk of cow and buffaloes respectively. The highest rate of frequency for Brucella antibodies according to MRT was found in February (12.1%), while the lowest rate was found in June (5.7%). This study emphasizes that Brucellosis is still a significant public health hazard in the Kurdistan region. The study recommends MRT adoption in routine monitoring of brucellosis in milk collection centre, dairy factories, and farm. Consumers are also recommended to sufficiently heat the milk to destroy this foodborne pathogen before consumption or industrial processing.