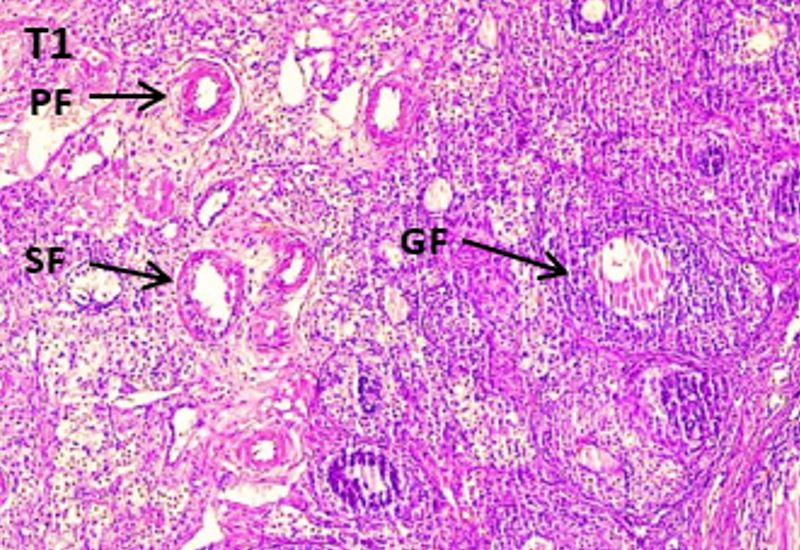 The current study aims to investigate the role of steroid-free follicular fluid antiserum on ovaries morphometric growth and development in virgin female rats at two sequential estrous cycles. Bovine follicular fluid aspired from graafian follicles, steroids were removed by treatment with activated charcoal, in order to obtained steroid-free bovine follicular fluid (S-FBFF) which was used for immunization of male rabbits to prepare S-FBFF antiserum (S-FBFF-ab). Sixty virgin female rats were assigned into control and treatment groups (30 each), intraperitoneal injected with a single dose of distilled water 100µl/rat and S-FBFF-ab 100µl/rat at late metestrus, respectively. At the estrus phase of the first and second estrous cycle, 15 females from each group of each cycle were anesthetized and ovarian samples were obtained for histological examination. In comparison with control, the results of S-FBFF-ab treated female rats revealed a significant increase of relative ovaries and uteri weights at both estrous cycles. Morphometric examination showed progressive ovarian proliferation at the first estrus phase in S-FBFF-ab treated female rats through elevation of the number of primaries, graafian, and total follicles. In conclusion, passive immunization against endogenous inhibin using S-FBFF-ab could augment the reproductive fecundity through increase ovarian growth and development.