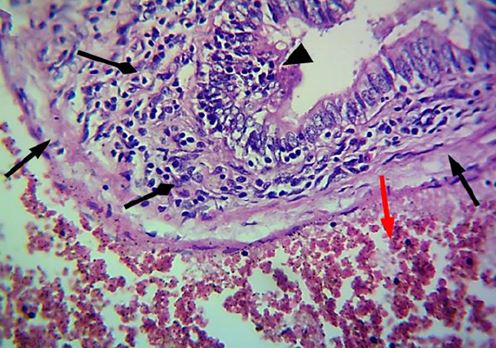 The present study was intended to determine the histological changes induced by Cytarabine drug on the structure of rabbit's livers and the protective effects of vitamin E on these histological changes. The treated group with daily intraperitoneal dose of (50 mg/kg body weight) of Cytarabine alone, showed a massive histological change represented by infiltration of mononuclear inflammatory cells, epithelioid cell and Kupffer's cells in hepatic tissue. Fibrosis in portal area, congestion of blood vessels as well as hyperplasia of bile canaliculi and coagulative necrosis of hepatocytes were also noticed in other sections. While the group that received protective (800 IU of vitamin E) prior to each Cytarabine injection, showed a considerable histological improvement than the group received Cytarabine alone, as the histological sections of this group showed a nearly normal histological architecture of the liver that represented by normal arrangement of hepatic cords, no fibrosis no congested blood vessels were seen. though distension of hepatic sinusoids and coagulative necrosis of some hepatocytes were still observed. The present study suggested that vitamin E is an effective chemo-protective agent against hepatotoxicity when used as a protective agent prior to Cytarabine drug taken.