Foot-and-mouth disease (FMD) is an extremely contagious viral disease affects all cloven- hoofed animals. The present study aimed to investigate the epidemiological situation of FMD in Egypt during 2017 and 2018, based on antigenic and genetic characterizations of FMD virus (FMDV). Thirty oral epithelia were collected from vaccinated animals (14 native cattle and 16 water buffaloes) showed clinical signs of FMD in four Egyptian governorates having outbreaks. In all collected samples the antigen detection was performed using enzyme-linked immunosorbent assay (ELISA), while the genetic characterization was done by using conventional reverse transcription polymerase chain reaction (RT-PCR), Sequencing and phylogenetic analysis were constructed for genetic characterization. The obtained results of FMDV antigen detection ELISA indicated that 50% of the examined samples were positive for FMDV and serotyped as serotype O 40%, serotype SAT2 33% and serotype A 27% respectively. RT-PCR confirmed the results of FMDV antigen detection by ELISA. Six amplicons were sequenced and phylogenetically analyzed for viral protein 1 (VP1) of FMD. Results demonstrated that genotype O was related to East Africa-3 (EA-3) topotype with 12.7% difference from vaccine strain O-IRN-8-2005-Pan-Asia-2. Furthermore, genotype A clustered into Asia topotype with 6% difference from vaccine strain A-IRN-1-2005. Meanwhile genotype SAT2 in 2018 was related to VII topotype but it was in close relation with strains isolated from Libya in 2012 with 94.3% amino acid identity that differ from the previously circulated SAT2 since 2012 and recorded recently in Egypt. The presented results confirmed the circulation of a new topotype of serotype SAT2.

This study was conducted to evaluate the influence of various postpartum disorders on subsequent reproductive performance in Iraqi cow buffaloes. The data were collected from 172 buffaloes within private dairy buffaloes herd. In this study, the diagnosis and treatment of the affected cases with postpartum disorders (Retained placenta, puerperal metritis, uterine prolapse and vaginal prolapse) contributed in the data collection based on the parity, calving time and reproductive parameters (days to first estrus, open days, service per conception, intervals between estrus and calving interval). Cow buffaloes were divided according to their postpartum disorders into 5 groups: first group (healthy), second group (retained placenta), third group (puerperal metritis), forth group (uterine prolapse) and fifth (vaginal prolapse). The results of this study showed that a total of 74.42% of the cow buffaloes had normal post-partum and open days 121.9 days with resumed ovarian cyclic activity within 77.41 days, increased incidence of G2, G3, G4 and G5 were 9.88, 6.97, 6.97, 5.23 and 3.48%, respectively. Open days were significantly longer in buffaloes in groups 2, 3, 4 and 5 compared to healthy group. In conclusions, early postpartum disorders manifested by increased days to first estrus, calving interval, days open and service per conception were longer than healthy cases in the Iraqi cow- buffaloes. 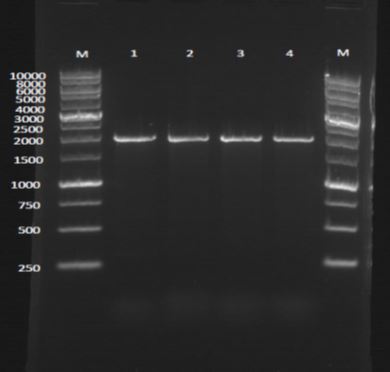 Microscopic identification, molecular and phylogenetic analysis of Babesia species in buffalo from slaughter house in Al-Najaf city of Iraq

Babesia is one of hemoprotozoan parasite transmitted by arthropod vectors which responsible for causing of Babesiosis disease in bovine worldwide. The present study was designed for microscopic identification, molecular, and phylogenetic analysis of Babesia species in buffalo from slaughter house in Al-Najaf city of Iraq. The study performed in three months of summer season (August into September 2017) and animals ages and sex were included in this study. The direct microscopic prevalence results were show highest prevalence of haemoprotozoa prevalence at Babesia sp. 45.74%. The prevalence of Babesia sp. related to animal sex, were show in male 43.48% and female was 52%, with non-significant differences. The Prevalence of Babesia sp. related to age were show 12.50%, 92.86% and 30% in young, adult and old age respectively with significant differences (P<0.05). The prevalence of Babesia sp. related to month of study were show. 28.57%, 62.50% and 42.86 in August, September and October respectively and with non-significant differences. Molecular study results were based on PCR and DNA sequencing method by phylogenetic tree analysis (MEGA 6.0) and NCBI-BLAST Homology Sequence Identity to differentiation Babesia species typing. The Babesia species prevalence results were show identified two Babesia species, high prevalence of Babesia bovis (38.30%) were closed related to NCBI-Blast Babesia bovis (HQ264126.1) with homology sequence identity 97-100% and Babesia bigemina 7.45% were closed related to NCBI-Blast Babesia bigemina (KU206291.1) with homology sequence identity 95-99%, then 43 Babesia species includes (B. bovis and B. bigemina) were submitted into NCBI-Genbank and provided accession numbers (MH503811-MH503853). In conclusion, this study concluded that Phylogenetic tree and homology sequences identity was show accurate in differentiation of Babesia species, and these species can be isolated at from local water buffalo from slaughter house in Al-Najaf city, of Iraq.

The present work was design to study the anatomical features and radiographic appearance of auricle and external acoustic meatus of cattle and buffalo, collected from (12) sample of heads were used in this study, there were equally divided into three groups: first group to study the shape, position and relation of cartilage, muscles and ligament of auricle in both animals, second group to study the measurements of external acoustic meatus, and the third group study morphological and radiographical of external acoustic meatus in both animal, the study revealed that the auricle is a flapy flashy appendage attached to the side of the skull by muscles and ligaments, the auricle is funnel shape, distally is wide open, but more proximally, it is rolled up to form a tube that bend medially to be connected to the external acoustic meatus, the auricle in both animals is composed of three cartilage: the part auricular, scutiform and annular cartilage also auricular muscle and ligament which support the external ear. The result of this study shows that intrinsic auricular muscles is more developed in buffalo, while the greater parts of the extrinsic auricular muscles are developed in both animals. The present work shows that the frontoauricular muscles are distinguish into two parts in buffalo and cattle on the other hand the interscutularis muscle thin fibers and attached with scutuloauricularis prefunds muscle in buffalo, also the parotidauriculares narrower and thicker in cattle, but a ribbon -like muscle thin and wide in buffalo. The external acoustic meatus begins where the rolled up part of the annular cartilage narrows and ends, the meatus has cartilaginous and osseous parts it is lined with skin the study provided that acoustic meatus about 5.667±0.0816 cm of length in cattle and 6.500± 0.126 cm in buffalo, the aim of present work is to report more detailed information about the auricle and meatus in both animal for value importment can easily examined by the speculum the shortness of the meatus should be courses of the risk of injuring of the tympanic membrane and to be able to pass the otoscope tube through the external meatus and to recognize the eardrum when it is seen, to know the surgical anatomy of auricle and acoustic meatus and to know the relationship of vessels and nerve that must be avoid during surgery and to be able to recognize all parts of the temporal bone on radiographs.