Biofilm is a microbial-protecting environment initiated on surfaces that reveals major health problems such as biofilms represented by dental plaques. Fighting biofilm formation is a hugely demanded process. Here, the crude extract of Streptomyces sdLi (sediment lake Iraq-sdLi) was used to check the anti-biofilm formation bioactivity (ABFB) against Escherichia coli (Orooba Meteab Diwanyah 4, OMD4) isolated from milk samples. Using a cross-streak method, each strain of Streptomyces spp. was tested for the best broad-spectrum ABFB. A triplex polymerase chain reaction (TPCR) method targeted specific genes and a fragment (hemin receptor molecule (chuA), uncharacterized protein YjaA (yjaA), and chuA TspE4.C2) was used to categorize 18 isolated OMD4. Using the alcoholic extract of liquid growth of the best strain with ABFB, a crystal violet biofilm assay (CVBA) was employed to test the ABFB against OMD4. The results of the screening test revealed Streptomyces sdLi with strongest ABFB; however, ethyl acetate, as one of the sdLi extracting solvents, was the most potent in in inhibiting the biofilm formation. The TPCR resulted in 18 isolates categorized into four groups A, B1, B2, and D in which B2 and D are known for their significant pathogenic activities in humans and animals. The results of the CVBA showed that Streptomyces sdLi extract was potential for its ABFB. This study recognizes that the Streptomyces sdLi extract is potential for deactivating biofilm formation by pathogenic E. coli which encourages future studies to consider this microorganism and/or its extract as a cure for the treatment of E. coli related illnesses in humans and animals. 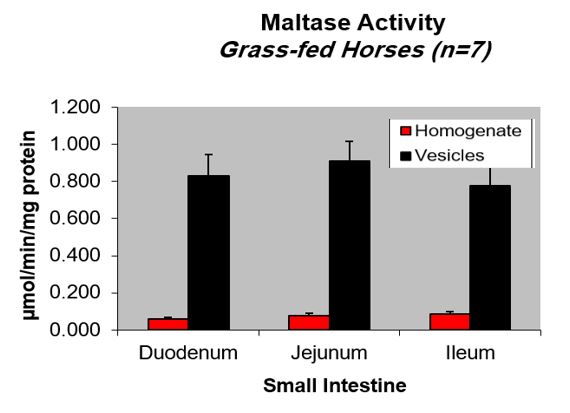 The disaccharides, consisting of sucrose, lactose and maltose, are hydrolysed into monosaccharides (D-glucose, D-galactose and D-fructose) by intestinal brush border enzymes: sucrase, lactase and maltase. The aim of this study to investigate changes in the brush-border membrane carbohydrate digestive enzymes. From intestinal mucosal scrapings of equine, brush border membrane vesicles were isolated. The results showed that sucrase, maltase and lactase are present in the equine small intestine. The activity of all three enzymes is highest proximally (in the duodenum and jejunum) and lower in the ileum. There was considerable variation between individual horses, however the majority showed highest disaccharidase activity in the jejunum, with some showing highest activity in the duodenum. Sucrase activity is highest in the jejunum and duodenum and lower in the ileum. Maltase activity is similar in all three regions, but slightly higher in the jejunum. Lactase activity is low in all three regions of the small intestine, slightly higher in the equine jejunum and duodenum than ileum. From this study, we can conclude that the equine small intestine digests disaccharides by the brush-border associated disaccharidases sucrase, maltase and lactase. Levels of sucrase and lactase are comparable to other species, but maltase is much higher.